The American Hardwood Export Council (AHEC) has launched a campaign called ‘Grown in Seconds’ to bring to life the highly sustainable credentials of American hardwood and the fascinating research around environmental Life Cycle Assessment (LCA), driving forward the discussion around the environmental benefits of using hardwood in design and manufacture.

As its name suggests, the heroic fact at the heart of the ‘Grown in Secondsec’ campaign, is the time it takes for the American forests to produce American hardwoods through natural regrowth alone – that means no replanting necessary. 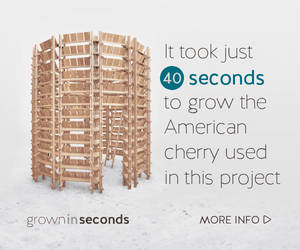 The American forests are so vast they cover around 33% of the country and their trees are harvested selectively. This means that when architects, designers or manufacturers specify American hardwoods for their creative projects, the wood they use is replaced through natural regrowth across the entire forest, within a matter of mere seconds, according to the amount of hardwood used in the project. Furthermore some species of American hardwood are growing faster and in greater volumes than we can even use.

‘Grown in Seconds’ serves to celebrate this by presenting nine creative projects produced by AHEC in Europe, showcasing their fascinating and remarkable environmental credentials; from the time it takes to replace the growth of American hardwood to the project’s carbon footprint.

Visitors to the AHEC booth at the International Furniture Fair Singapore will see presentations from www.growninseconds.org as well as furniture from ASEAN countries as part of the continuing campaign “Designed in Asia and Made in Asia with American Hardwoods”.